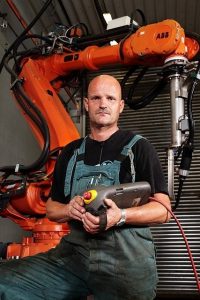 Last summer, a young woman was crushed while trying to fix a sensor fault in robot at an Alabama automotive plant where she worked. She was a temporary worker and was not trained to repair robots and should not have been in the sensitive zone. Maintenance did not respond to a request to repair the robot, so the woman and three other co-workers were encouraged to solve the problem themselves. They entered the robot’s workspace when it suddenly re-engaged, unexpectedly crushing the employee. An increasing number of jobs once performed by humans are now being performed by robots. Most incidents occur during activities such as maintenance, programming, testing, set-up, and adjustments of the robots. During many of these operations the worker may be temporarily within the robot’s working envelope, while power is still available to elements of the robot system.

Employees who are expected to have any possible contact with the robot system should be extensively trained. These usually include: engineers, managers, supervisors, operators, programmers, maintenance personnel and bystanders. Workers must be familiar with all working aspects of the robot, including the full range of motion, known hazards, programming information, locations of emergency stop buttons and power sources, and the importance of safety barriers. Training should also include procedures for freeing a colleague who becomes caught. It should be emphasized that just because a robot is stopped does not mean it will remain stopped. Also, just because a robot is repeating a motion, does not mean it will continue to repeat that motion only.

Employers need to consider a number of safety factors when designing the robotic workstations. One of the most important features is a safety fence, at least six feet tall, with interlocking gates. It should not be possible to enter the robotic workstation while the gate is closed. Another important feature is a presence sensing device. These include light curtain installations pressure floor mats and ultrasonic sensors on the robot’s arm. When a presence is sensed by the device, the robot is triggered to either operate at a greatly reduced speed or halt motion entirely. The ideal design includes more than one sensing device. Additionally, consider all aspects of the robotic controls. They should never be located within the area where the robot is working and should always be guarded against accidental operations. Utilize, as much remote technology as is feasible, so that troubleshooting can occur outside the robot’s workstation. Make sure there are numerous emergency stops located in easily accessible and convenient locations as well as portable programming control devices that contains an emergency stop.