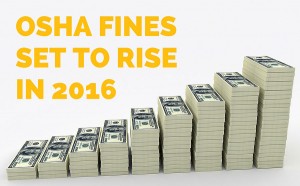 For the first time in over 25 years, the Occupational Safety and Health Administration is about to increase monetary penalties for standards violations. What does this mean for your business?

The initial fine increase in 2016 can account for the previous 25 years of non-adjustment, and many experts are saying that could mean an increase of over 80%. However, the Act does give OSHA the discretion to increase penalties less than the maximum amount if the increase would have a negative effect on the economy or if the full increase would result in social costs that outweigh the benefits of the increase. OSHA will be required to publish the plan for the first inflation adjustment by July 1, 2016, with the fee adjustment to become effective by August 1, 2016.

In addition to the catch-up adjustment this year, the bill allows OSHA to continue raising fines annually to keep pace with inflation. While most statute violation penalties have been inflated every four years, OSHA and a few other federal agencies were previously exempted from raising their fines under the Federal Civil Penalties Inflation Adjustment Act. Moving forward, businesses can expect to see these annual increases by no later than January 15 of each year. The goal of this new change is to keep the fines up-to-date as a relevant penalty.

For many businesses, the small OSHA fines of the past were simply a cost of doing business; compared to other costs and risks, companies simply did not see the penalties as financial deterrents. 2016â€™s increased fees could have a significant impact on smaller businesses or businesses who have previously found it unimportant to implement a safety program. Safety experts hope that businesses will make worker safety and OSHA enforcement a priority. Others believe that the penalties are already high enough and that increases will not add any extra deterrence to safety violations. Whatever your thoughts on the outcome of the penalties, one thing is clear: they are coming, and they can be scary. Now is a great time for businesses to review their safety programs, update worker training and implement procedure updates to ensure standard enforcement.